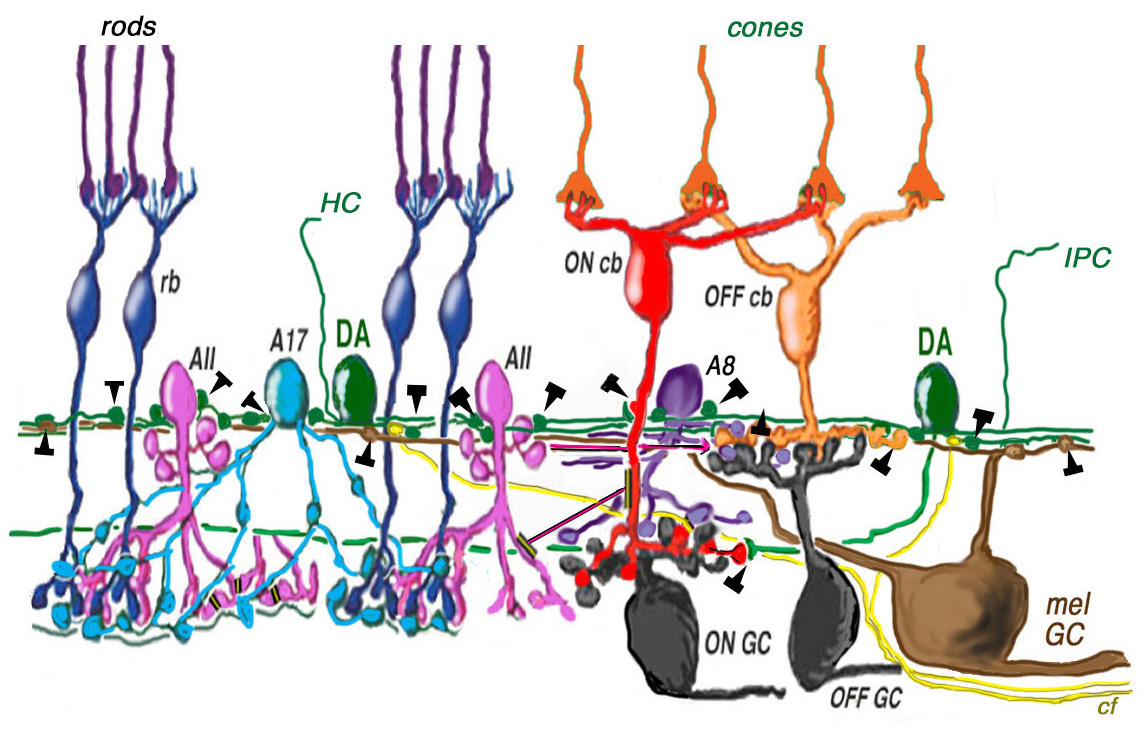 We have a new chapter in Webvision on The Role of Dopamine in Retinal Function by Elka Popova. 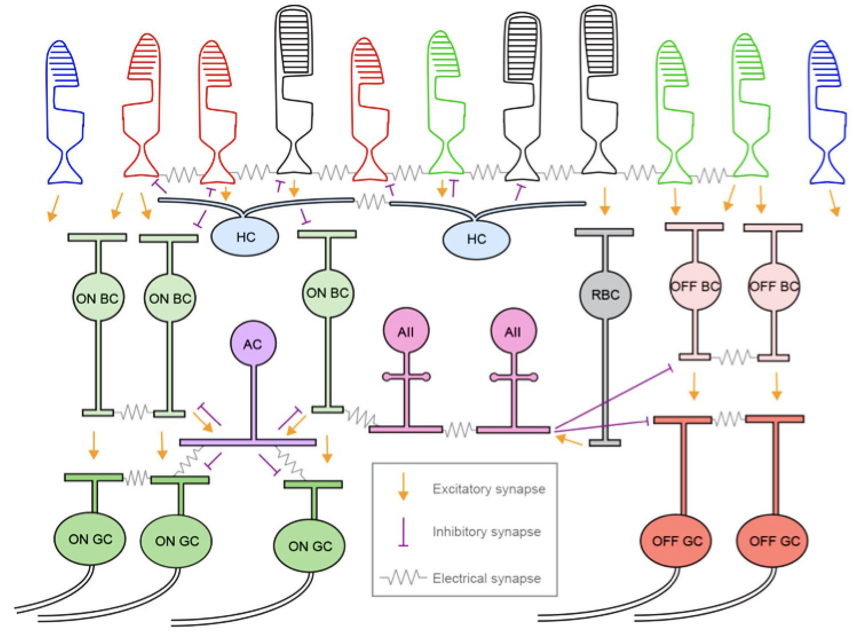 We have a new chapter in Webvision on Myriad Roles for Gap Junctions in Retinal Circuits by Stuart Trenholm and Gautam B. Awatramani. 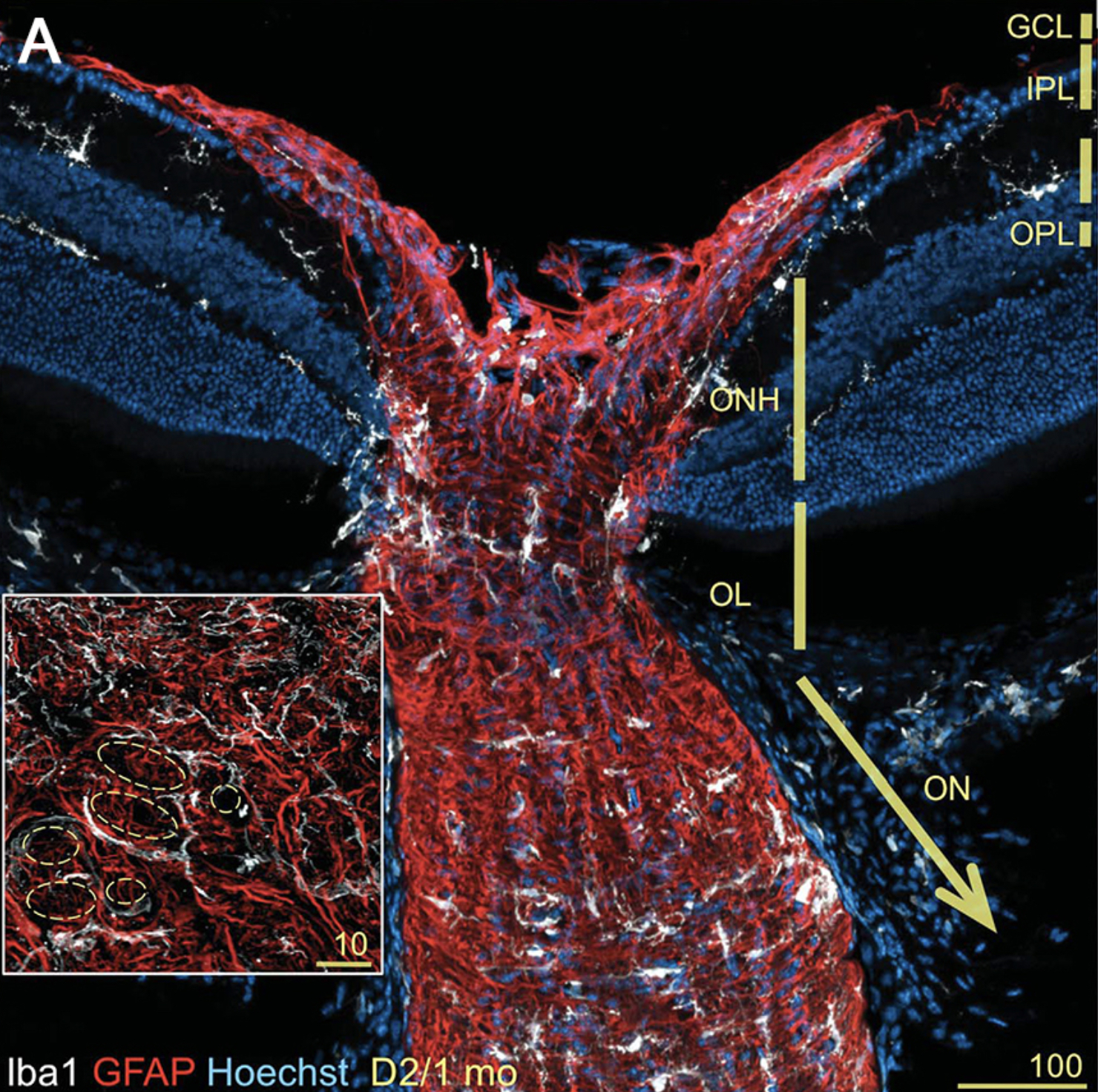 We have a new chapter in Webvision on What Is Glaucoma?, by David Krizaj.

In Webvision news, we have gone through some changes here, mostly under the hood, though some will have changed the appearance of Webvision subtly.

Webvision has now migrated to a new server.  Most of the lifetime of Webvision has been running on Macintosh OSs of various flavors.  But with the deprecation of Apache in the latest OS X Server, the writing was on the wall and I moved Webvision to a new server, running Linux.  My thanks to the Moran Eye Center for helping with the costs of securing a new server.

Additionally, with consulting help from Anesti Creative, we have optimized Webvision, creating a responsive website for more platforms and increased the security, which these days unfortunately is necessary given the increased number of attacks literally every minute of the day from around the world.

We have endeavored to make this as easy as possible for end users, and hopefully these changes will result in an easier to use website, particularly from mobile devices and tablets. The famous Prado Museum in Madrid has opened up a new exposition for the blind by making a combination of elaborate copies of six of the museum’s masterworks through 3D printing and painted reproductions.  The whole idea is for the blind to be able to touch the works and open up a whole new arena of accessibility to the visually impaired.

The Prado is one of the museums that we here at Webvision have not yet made it to.  One of these days, that will have to happen.

Update 05/26/2015: NPR has a wonderful article on Morning Edition about the exhibit here. There is an excellent editorial, Death by a Thousand Cuts by the former head of FASEB, William T. Talman on the research budget cuts in science.  It is well worth your time to read it, consider its content and share with people you know.

The Arnold and Mabel Beckman Foundation is pleased to announce the 2015 Beckman-Argyros Award in Vision Research.

The BECKMAN-ARGYROS AWARD IN VISION RESEARCH is an annual award established in 2013 to honor and celebrate a decades-long friendship of two remarkable men, Dr. Arnold O. Beckman and Ambassador George L. Argyros, and to continue their commitment, dedication and shared vision to make the world a better place. The Beckman-Argyros Award honors Ambassador Argyros for his 22 years of service as Chairman of the Board of the Arnold and Mabel Beckman Foundation and recognizes the special and unique friendship he shared with Arnold O. Beckman for over forty years.

The Beckman – Argyros Award in Vision Research is intended to reward one individual who has made significant transformative breakthroughs in vision research.

In an unprecedented recognition of extraordinary achievement in scientific research and to further support this research, one award will be made annually.  The recipient will receive a total of $500,000 along with a commemorative medallion.

In contemplating potential nominees, please keep in mind that while the Arnold and Mabel Beckman Foundation currently supports one Initiative which focuses solely on macular degeneration (MD); the Beckman-Argyros Award is separate and apart from said Initiative and is not intended to focus solely on MD, but the broader spectrum of vision research.

All of the details regarding the Beckman Argyros Award in Vision Research and Nomination Process may be found at the following website:  http://www.beckman-foundation.com/beckman-argyros

Please do not hesitate to contact the Beckman-Argyros Program Administrator at beckmanargyros@beckman-foundation.com if you have any questions. After much work by a number of our contributors, not the least of whom is the author of this particular effort, we have a spectacular new addition to Webvision:  A section on the Evolution of Phototransduction, Vertebrate Photoreceptors and Retina by Trevor D. Lamb.  Be sure to check it out and let us know what you think in the comments.

END_OF_DOCUMENT_TOKEN_TO_BE_REPLACED Nikko Ronquillo will be defending his dissertation on Wednesday, May 15th at 2:00pm in the Moran Eye Center auditorium on the 1st floor.  Nikko’s dissertation, performed in Wolfgang Baehr’s laboratory is on the Functional and morphological studies of the NPHP5 mouse model: insights into Senior-Løken Syndrome. Yingbin Fu, a Moran researcher and assistant professor of Ophthalmology and Visual Science at the University of Utah, is one of 10 winners of the Audacious Goals Challenge, a nationwide competition for compelling ideas to advance vision and science. END_OF_DOCUMENT_TOKEN_TO_BE_REPLACED Last year we started a tradition here on Webvision of summarizing some statistics of traffic to Webvision to give you some idea of who the users and visitors are.  While 2011 was  a year of major infrastructure change to Webvision with a complete replacement of the database backend and a move to hosting with a WordPress based platform, 2012 was a year of steady growth, updates to many existing chapters and the addition of 2 new chapters on Retinal Ganglion Cell Dendritic Structure And Synaptic Connections by Ning Tian, and Glycine Receptor Diversity in the Mammalian Retina by Silke Haverkamp and a chapter on Visual Evoked Potentials by Don Creel.

END_OF_DOCUMENT_TOKEN_TO_BE_REPLACED Peter Westenskow from the Friedlander Laboratory at Scripps sends this rather excellent neovascular Santa tuft for everyone to enjoy for Christmas and the New Year.  Thanks Peter!

Peter was a star graduate student here at the Moran Eye Center in Sabine Fuhrmann’s laboratory and has done amazing science in his post-doc at Scripps.  He’s decided to start looking for his first faculty position, so if you have any spots, give him a shout. Congratulations to our colleagues mentioned in the following press release.  We are always enthused to hear about funding and commitments to research, particularly when federal funding of research through traditional means has been getting harder to obtain.  This is where funding from private foundations like Foundation Fighting Blindness come through.  It enables work to progress that otherwise would not happen and for those of us who are working so very hard to find cures for blindness or treatments to mitigate vision loss, this is invaluable.

END_OF_DOCUMENT_TOKEN_TO_BE_REPLACED

This study by Paul S. Bernstein, Faisal Ahmed, Aihua Liu, Susan Allman, Xiaoming Sheng, Mohsen Sharifzadeh, Igor Ermakov, and Werner Gellermann in IOVS examined the macular pigment in AREDS2 patients.  AREDS2 is a randomized, placebo-controlled study designed to determine whether supplementation with 10 mg of lutein and 2 mg of zeaxanthin per day can slow the rate of progression of age-related macular degeneration (AMD). END_OF_DOCUMENT_TOKEN_TO_BE_REPLACED