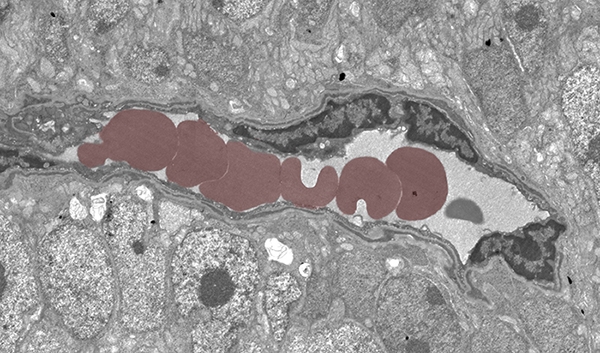 Question: How small can the blood vessels in our retinas get?

Answer: Smaller than the diameter of a red blood cell (~6-8µm wide). A very cool paper was published in JAMA yesterday that is a result of Google Research asking if machine learning and computer vision could improve retinal fundoscopic examinations of patients with diabetic retinopathy.  The outcome of course is increased patient screening for physicians with limited resources.

Bruch’s membrane is a highly specialized and multi-laminar structure in our retinas that forms the basis for mediating interactions between the retinal pigment epithelium and blood flow from the choroid.  I’ve not seen many good images online, so figured this image from mouse would be a good addition showing the relationship of the basal surface of the RPE with Bruch’s membrane.

END_OF_DOCUMENT_TOKEN_TO_BE_REPLACED

This animated GIF file illustrates the height of the hamartoma and is another example of where animated gifs can be a fantastic teaching tool.

The left and right stereo images shown were taken with a Zeiss FF-4 Fundus camera by James Gilman of the Moran Eye Center. We at Webvision would like to wish you the very best this holiday season.  As in past years, we like to post an image from retinal science that is somehow evocative of the Holiday Season and this year, Gabe Luna from the Steve Fisher / Geoff Lewis laboratory delivers a stunning image of astrocytes in a retinal flat mount, but with a twist… We think you’ll be seeing more of Gabe’s beautiful imagery, but for now, here is his description of how he made this image:

“I used a GFAP-GFP mouse to identify all the astrocytes in the retina and manually (at the time it was manual) annotate their coordinates, then we used a probabilistic random-walk algorithm to go to each “cell center” and perform a segmentation result of that one astrocyte.  Once all the 5,000 or so cells are segmented as a greyscale image of the individual cell, then they are assigned various hues that are spectrally distinct and the montage is re-assembled into one large image.  The image there is a grossly down-sized image of the original.  The original was a seamless mosaic of 412 individual z-stacks of about 15 planes at 1 micron intervals, using a 40x oil immersion lens.” We talked about using smartphones for ophthalmological examinations before here on Webvision, and we now have a bit more information into the logistics of how the Peek Vision project will be done on this Mashable post with a clip on attachment being developed through funding from an Indiegogo campaign.

There is also a wonderful background video of TED Fellow Andrew Bastawrous describing the tools above. We have a new chapter on Albinism in Webvision by Don Creel who describes the clinical picture of albinism along with some of the anatomy and electrophysiology of the visual and auditory systems.

We’ve talked about jumping spiders before here on Webvision as they are an amazing animal with very well developed vision.  However, their retinas and visual pathways are very different from the vertebrate retinas in that they use image defocusing for depth perception rather than parallax like humans and other vertebrates do.  Figuring out spider vision has been a long standing effort by a small group of scientists and one of the problems of observing spiders is figuring out how they scan.  The movie above however shows a transparent jumping spider with the pigment cells in its eyes/retinas moving while they scan an image.  There is another pretty impressive movie here, showing a microscopic view into the retina of a living jumping spider.

Hat tip to Sung Soo Kim who found this and retweeted Richard Dawkins on Twitter.

Our colleague and Director of Research at the University of Utah‘s Moran Eye Center, Robert E. Marc, Ph.D. has been named by the International Society for Eye Research as a recipient of the Paul Kayser International Award in Retina Research.  The award will be presented to Dr. Marc during the 2014 ISER Biennial Meeting of the Society for Eye Research in San Francisco, California on Thursday, July 24th, 2014.

The Paul Kayser International Award in Retina Research was created by the Directors of Retina Research Foundation and endowed by the Trustees of The Kayser Foundation to honor and perpetuate the memory of long-time friend and dedicated benefactor of RRF, Paul Kayser. Through this award both organizations are demonstrating the conviction they shared with Mr. Kayser that blindness caused by retinal disease is a global concern and must be addressed accordingly. It is thus the purpose of this award to foster greater awareness of the need for intensive study of the retina, its role in the visual process, and the retinal diseases that threaten and/or destroy eyesight by recognizing outstanding achievement and sustaining meritorious scientific investigations worldwide.

Dr. Marc was chosen as the recipient of this award for his lifetime body of work in retinal research, discovering the structure and function of the retina through novel technologies and approaches that have pushed our understanding of the retina forward. This abstract was presented today at the 2014 Association for Research in Vision and Opthalmology (ARVO) meetings in Orlando, Florida by Christin Hanke, Houbin Zhang, Cecilia D. Gerstner, Jeanne M. Frederick AND Wolfgang Baehr.

Results: Western blot of WT retina with anti-Arl3-Ab identified a 20 kDa protein, which was significantly reduced in two month-old mutant (Arl3flox/flox;iCre75+) retina. Immunohistochemistry revealed Arl3 localization predominantly in the inner segments of WT photoreceptor cells. Arl3 immunoreactivity was absent in homozygous rod knockouts, but still present in cones and the inner retina. Scotopic and photopic ERGs of rod knockout and WT mice at PN15 had comparable amplitudes suggesting normal phototransduction. Retina histology of PN15 knockout mice was comparable to WT. One month-old Arl3flox/flox;iCre75+ mice showed reduced (80-90%) scotopic, but normal photopic ERG responses. In retinas of two month-old knockout mice, scotopic ERGs were extinguished, whereas cone ERGs were highly attenuated. Retinas of one month-old homozygous knockout mice had 4-5 rows of nuclei in the ONL, and only one row in two month-old mice. Immunohistochemistry of PN 15 and one month-old retina sections revealed that rhodopsin transport, as shown by rho1D4 labeling of ROS, is normal. Rhodopsin was undetectable in two month-old conditional knockout mice due to complete photoreceptor degeneration. “The primary abnormality involves the choroidal circulation, and the characteristic lesion is an inner choroidal vascular network of vessels ending in an aneurysmal bulge or outward projection, visible clinically as a reddish orange, spheroid, polyp-like structure….   The natural course of the disease often follows a remitting-relapsing course, and clinically, it is associated with chronic, multiple, recurrent serosanguineous detachments of the retinal pigment epithelium and neurosensory retina with long-term preservation of good vision.”